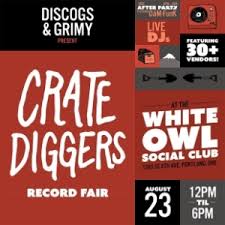 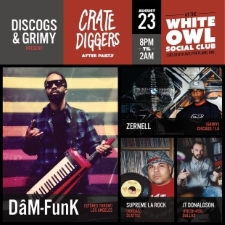 Last month we ran a pretty awesome record fair/after party in Portland, thought it would be worth sharing a bit here about the experience. The day started off with the record fair, we had over 30 vendors from all over the place selling some great stuff. Really wish the event had taken place closer to my payday, I could have easily spent hundreds of bucks there but ultimately decided to hold off. I did grab a signed copy of PBW’s My Vinyl Weighs a Ton (the 3LP version!) for $30 which was sweet.

After checking out a lot of the vendor stuff I ended up manning the Discogs area until the start of the after party. It’s been a long time since I’ve helped run a booth at an event like this, it was definitely a lot of fun. Giving out Discogs merch and  getting a chance to hear feedback from the community (most of it very positive!) was awesome. I’m looking forward to helping out at future record fairs to experience this again.

Unfortunately the weekend this all took place was a very very busy one for me. The day before I had driven to Seattle for a Seahawks game and came back home after so I was running on about 4 hours of sleep or so. I managed to catch some of the earlier sets from the after party which were fantastic but I couldn’t stick around for Dam-Funk’s set which was a huge bummer (big fan of his stuff). If this becomes an annual event I will definitely be planning ahead better!

The event turned out really well and was a great time. It took a lot of work from those involved to make everything a success, I’d like to think it was all worth it. It sounded like everyone was hoping to do this again in the future, so hopefully this won’t be the last “Crate Diggers” event!

Below are some photos of the event:

OPB also interviewed Liz/others and wrote up an article here.