Blu & Exile – Below The Heavens 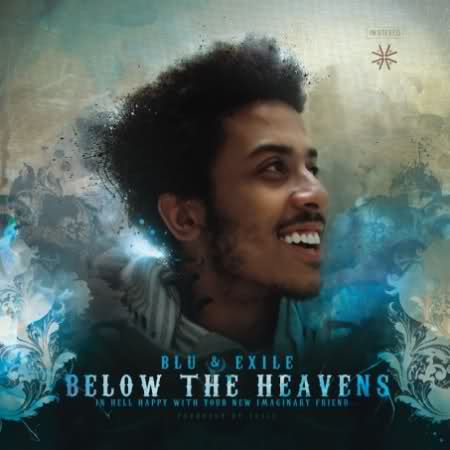 Not sure how often I will be writing about albums so soon after listening to them for the first time, but I really feel like writing something about Below The Heavens tonight. I can’t believe I hadn’t checked this one out sooner, this is one of the better hip hop albums I have heard in quite some time. Before listening to this collaborative effort I really hadn’t heard much by Blu or Exile, but I will be keeping an eye out for what they are working on from now on.

As someone wrote in a review for the CD over at Amazon, I would agree when they say “this is the album that Common wishes he could’ve made this year [2007]”. There is the usual Common/Talib/other conscious rapper vibe to this album, but the records that these guys put out can sometimes be inconsistent on the rap and/or production side. That’s what is so surprising to me after listening to Below The Heavens in its entirety. This album is incredibly consistent, the only song I can imagine skipping during a play through would be “Juicen’ Dranks”, which isn’t a bad song by any means. I just don’t care for the featured artist that much (Looking at the comments for the song on Youtube, seems a lot of folks agree).

I mentioned in my earlier post that I wasn’t that big into Blu on the mic, but after listening to the full album over the last couple of nights I think I have come around a bit. I didn’t mean that I wasn’t a fan of his rap, I just don’t believe he is as technically strong as other similar emcees. While this still may be the case, especially in consideration of some of Blu’s later stuff (BTH is his best material I have listened to), I really dig the honesty in the content that he’s presenting to us. Though everything he’s talking about might not relate to you and I, I believe everyone can feel where he’s coming from through his music. I have always liked how the genre of hip hop in particular can provide a platform for artists to express themselves so personally and I feel that Blu provides a fantastic example of this through his work on this album.

On the other side of this release, I don’t think I can say enough good things about Exile. His production on the album is absolutely flawless and it really does play a huge role in how well it turned out in my opinion. He does keep it safe by not pushing the boundaries, doing anything experimental or any crazy stuff like other more underground/indie producers will often do, but this ends up benefiting the project greatly. By not going too far out, he allows the listener to remain focused on the lyrical content that Blu is putting out there, again an important factor considering how personal he does get with what he’s expressing to the listener. The production is very laid back, soulful, and smooth on every track (besides Juicen’ that sticks out a little too much…), which in combination with Blu’s flow leads to a great sound. Looking at some of the reviews for the album, he seems to be overshadowed by Blu’s rap which I don’t think is really fair. Blu is certainly fantastic on the album, but I believe Exile deserves props/recognition for providing him some excellent material to work with.

While I haven’t listened to this album nearly enough to consider it a classic to myself personally, I can certainly see why the word is used so frequently when discussing this record. I’m sort of ashamed to admit I hadn’t heard it until 5 years later, especially since folks have been telling me to check it out for awhile now. I had listened to the two singles a bit and thought they were great but I never really went to the effort of remembering to grab it I guess. Fortunately I made the impulse purchase from Fat Beats when they posted about the 30 or so remaining copies they had left in the more limited blue vinyl release. Below The Heavens is definitely an album I love having on wax and I’m happy I was able to grab the more limited one before they were out! This is something I imagine I’ll be listening to for quite some time now.

Songs included above are The World Is (Below The Heavens), In Remembrance Of Me, Show Me The Good Life, and My World Is.

This entry was posted in Album, Music, Ramble and tagged Blu, Exile. Bookmark the permalink.