The Music of Red Dead Redemption

Posted on September 9, 2013 by waxramble

Over the last month I’ve played Red Dead Redemption in anticipation of Grand Theft Auto V and last night I finally finished the game. This was a fantastic game, I feel bad for having waited so long to finally get around to playing it. While playing the game it becomes clear that there was a great amount of attention paid to the music and sound, which is true of almost any game released by Rockstar.

The video above discusses the creative process that took place when crafting the game’s sound. The use of composing music through “stems” is very interesting to me, as it really does help the music sound as if it is adapting to the gameplay organically. I may be wrong, but I believe this was one of the first instances in which this method of composing a Rockstar game (and maybe any game??) was used. This method would later be seen in HEALTH’s fantastic score for Max Payne 3. The video also shows the large amount of instruments and talent that was utilized in recording the music for this game. The authentic sound and the use of stems in composing the game really did help make the world of Red Dead Redemption feel like the great western films of the past.

It’s also worth mentioning the limited vinyl release that the soundtrack received through Wax Poetics. I was fortunate enough to purchase this back when the game came out as it is now quite rare. In addition to the fantastic compositions heard throughout the game, there are also songs on here that make the vinyl worth owning. The gatefold cover and red vinyl are a nice touch as well which can be seen below: 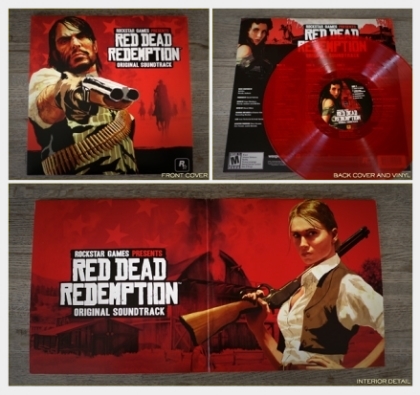