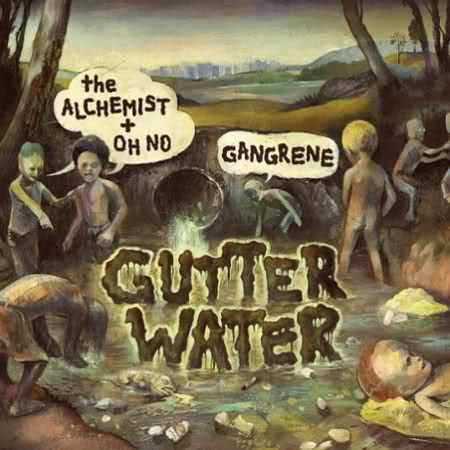 One of my favorite projects that I have been following for the past year or two would have to be the collaboration between Oh No and the Alchemist who make up Gangrene. Both are fantastic producers and I don’t think anyone could have imagined how great combining the two could be for an entire album. I have heard some compare this to Jaylib (Madlib and J Dilla) and while my opinion might not be very popular, I would confidently say that the project between Oh and Alc has produced better work. To be fair though, I think a lot of this has to do with the way that the two projects went about making music. Champion Sound mainly consisted of Madlib and Dilla sending each other their own beats so that the other could rap over it, while the collaboration of the Gangrene project has been far more involved (Both producers working on the project with the intention of creating an album and having them both rapping in the same songs). So while Jaylib might have been one of the first notable times two producers have come together to make an album like this, I feel like Gangrene has shown how well the formula can work if both artists work together a lot more closely.

What is interesting is that before this album came out in late 2010, the two had actually worked together on Alchemist’s Chemical Warfare album in 2009. I remember seeing the video for Under Siege and hoping that Oh and Alc would do more together. I was listening to a lot of Oh No at this time (The Disrupt is fantastic), so I was very excited about some new work coming from him. Before Gangrene though (or the video of them for his album anyway), I had never really checked out much by the Alchemist. The production of his I had heard before and I enjoyed it, but I never really heard him on the mic. From reviews I have read for Gutter Water and other projects that the two have rapped on, I keep hearing that they “aren’t the best on the mic”, etc etc. While I wouldn’t say that they are world class emcees (I would say the same of almost any producer, including Madlib and J Dilla too) I feel like they are still surprisingly good considering that both of them have mainly been producers within their work in hip hop. I’d say Oh No is a little better on the mic than Alc is, but I feel that they both still flow well over the beats that they have made for the album. The production by the both of them also makes up for any limitations that they might have on the mic, as Alc/Oh are incredibly good at what they normally do (making beats!).

So when the album finally was released I remember having to wait for Stones Throw to ship the vinyl copy that I had ordered. The wax copy was actually very nice, it came with two green records and included a download card for the full album on MP3 (Stones Throw really should start doing this…). I was very tempted to buy the MP3 album on Amazon while I waited, but decided to save my $10. If I had known how good this album turned out, I probably would have ended up grabbing it the second it was available online though. Looking back I believe this probably would have been my favorite album of 2010.

While all of the tracks on the album are great, there are two that I thought were worth noting. The first would have to be Brass Knuckle Rap, which features Guilty Simpson. All three are incredibly on point with this one. It was always awesome to me how hard each of them came in one after the other, especially how Oh follows Guilty’s awesome feature. Guilty Simpson is probably one of my favorite regularly featured emcees with the ST crowd, so it was nice to see him on this album. Easily my favorite song from Gutter Water, I’m known to play it a little too often on Turntable.fm (Hey, it’s too awesome not to play over and over!). On the production side it is hard for me to pick a favorite, but one of the coolest beats would have to be All Bad. Every time I’m done listening to the album, this beat manages to get stuck in my head for at least a few hours…

I was very happy to see the two come back together for another album that was released the other week. I’m not going to write about it here right now (Still waiting for my copy on wax to show up), but I have to say that it’s one of my favorite albums in years and that it’s hard for me to imagine a better album coming out this year. It’s very early to tell, but the new album is bananas. I will write about Vodka and Ayahuasca sometime this month. This post is already long enough, so I will end it here! If you haven’t heard of this project for some reason, I would highly recommend checking both albums out.

Songs included above are Brass Knuckle Rap and All Bad.

This entry was posted in Album, Music, Ramble and tagged Alchemist, Gangrene, Oh No. Bookmark the permalink.